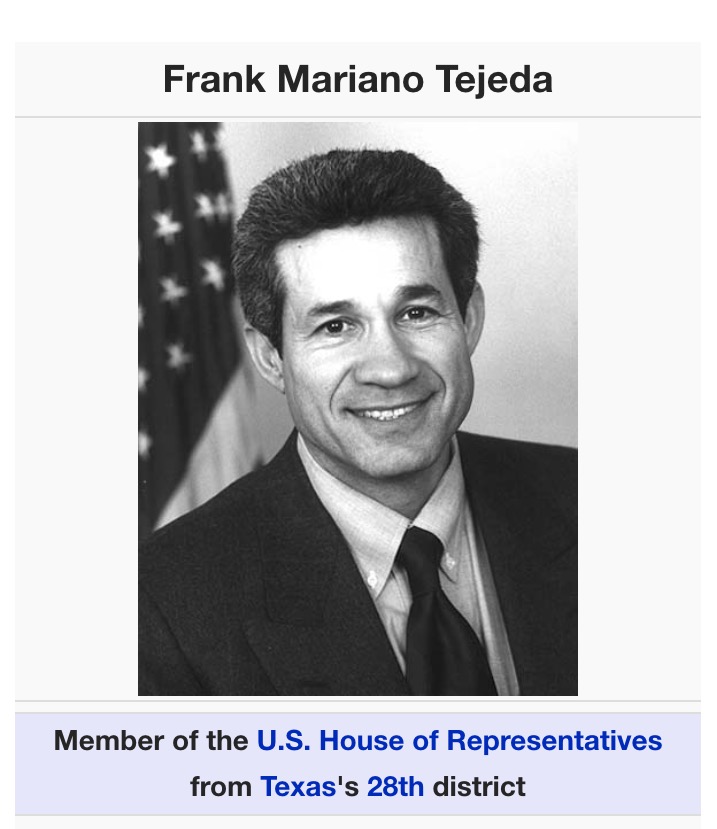 DTXMr. Speaker, first of all, I would like to thank the gentleman for asking for this special order today in memory of a great American and a great friend.Mr. Speaker, I was one of those fortunate Members of Congress who was able to visit with Frank about 3 weeks before he died and, as we all know, Frank loved his children. And even before Frank was diagnosed with this cancer, he was telling me about the heavy schedule and how important it was for him to attend some of the soccer games that his boy, Frankie, played. He said this is one of the things I miss the most, being with my family.When I visited with Frank this last time again, we talked about the family and about the marine that he was, how he loved the military. But at this moment we are very fortunate to have Frank's mother with us in the gallery, Mrs. Tejeda, Frank's sister, and members of his family, as they were recognized last night during the President's State of the Union Message.For 4 years Frank and I sat together in that same corner listening to the State of the Union Message and looking forward to seeing what was in that message that we could dissect and take back to our district and tell people how we would be able to change their lives, and impact on their lives something on the positive side.Frank was a very religious individual. This last year I would ask Frank to go out with me to attend certain functions, and Frank would say, I am sorry, I cannot go with you because this is my prayer time. I have to go to my home and spend time talking to my God and reading my Bible.Frank was also kind and forceful and generous and committed to those he served. After Frank fought for his country, he fought very hard for veterans, farmers, and Hispanics in Texas and in Washington. Frank was a wonderful person who died far too soon, too young. He taught us all how to be better people and he set an example for all of us to live by. Frank had a quiet strength. His decent life spoke volumes about Frank.He was very uncomplicated. When he wanted to tell you something, he was very blunt, but he spoke the truth. At this moment, I would like to include the rest of my statement for the Record, because I know that there are many, many friends who would like to take time in this special order today to honor a great hero, a great friend, Frank Tejeda.I thank the gentleman from California [Mr. Becerra], the chairman of the Hispanic caucus.Because he was contented, he was unflappable. Frank was also kind, forceful, generous, and committed to those he served. After he fought for his country, he fought hard for veterans, farmers, and Hispanics in Texas and Washington.Frank was a beautiful man who died far too soon--too young. He taught us all how to be better people, and he set an example for all of us to live by.Frank had a quiet strength. His decent life spoke volumes.He was uncomplicated--he meant what he said and he said what he meant. His word was literally his bond.His story was very much the American story--about the ingenuity and creativity of one man's rise from obscurity to power.Frank was an inspiration to me. Frank exemplified the very best in public service, honesty, and integrity. He was a true leader who believed in the value and decency of the working class.He always said he was proud to be a marine grunt--he didn't want it any other way. That same ideal moved him to work hard all his life and to stick up for the working people he represented so well. Frank always approached problems with commonsense solutions and an engaging sense of humor.This Chamber still feels empty without Frank--yet I know that Frank is watching us now and telling someone we are making too big a deal over him. For that was Frank--simple, low-keyed, and focused.Frank showed enormous grace and courage over the past year while dealing with the pressures of cancer and chemotherapy. As always, the highly decorated and respected marine fought the valiant fight.He was such a disciplinarian--with his professional life, with his personal ethics, and with his physical health. I greatly admired him--as did many Texans. Frank Tejeda was one of the best friends I ever had.We need to remember Frank's children--Marissa; Sonya; and Frank III--and his mother Lillie during this difficult time. His mother was here with us last night, honored by President Clinton as an American hero in Frank's stead.We should also remember his sister Mary Alice Lara--who accompanied their mother last night--and his brothers--Juan Tejeda, Ernest Tejeda, and Richard Tejeda in our prayers.Frank Tejeda was a giant among men, and among leaders.Frankie--I love you brother. You leave us a beautiful memory. We will all miss you, but we will cherish your memory.I thank the gentleman from California for sponsoring this special order. Rep. Xavier Becerra