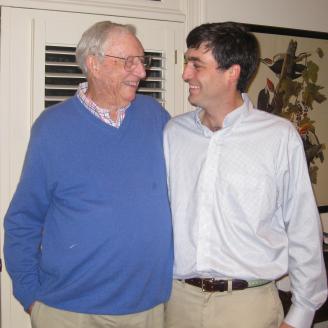 Frank was a member of the class of 2006 at the Citadel, where he graduated with a
Bachelor of Science Degree in Civil Engineering. Frank has been employed by a local Civil
Engineering firm, Hussey Gay Bell, since May of 2006.

On June 7, 2009 Frank experienced a Grand maul seizure after an engagement party
for his twin sister Katherine and brother-in- law Bart’s engagement party. Frank was rushed
to the hospital, given a CT scan, and the doctors discovered a plum size growth in his right-
temporal lobe. Following that scary evening his family was able to schedule Frank for a
craniotomy on June 22, 2009 where his neurosurgeon removed as much of the anaplastic
astrocytoma tumor as his surgical team could. For the next year Frank underwent daily oral
treatments of chemotherapy to treat any of the cancerous cells which may have not been
removed. With the loving support of his family, friends, colleagues, Doctors, nurses, and
his faithful springer spaniel Bouy, Frank managed to return to work relatively quickly
following surgery back to his fulltime job with Hussy Gay Bell where he is still employed with
his “work family”. Since that summer, Frank has managed to faithfully endure years of
various chemotherapies, and 33 treatments of radiation at Hollings Cancer Center.

His oncologist, Dr Scott Lindhorst, placed Frank on intravenous anticancer immune
therapy treatments in the fall of 2014. Frank developed many meaningful friendships with
all his nurses in the infusion suite of Hollings Cancer Center. In July of 2017, Dr Lindhorst
removed Frank from his intravenous therapies and has received a “non-progressive”
diagnosis ever since. Frank still returns to Hollings Cancer Center for MRI’s to monitor his
continuous progress. And, after every scan, Frank returns to the infusion suite to visit his
dear friends with a big smile and bear hug.

Frank would attest his successful battle with this horrible disease to the dedicated
staff at Hollings Cancer Center and the power of Faith. Frank wakes up every morning
asking the Lord to give him a purpose and God’s grace to make through each day, one day
at a time. Frank aspires to fall in love, start a family, living a long life full of adventure.