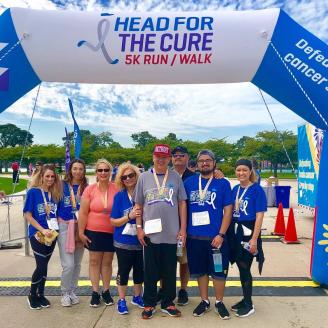 As a dentist, family-man, and avid golf player, my dad was looking forward to retirement in the near future. Little did he know that his retirement days would entail the biggest fight of his life. In March 2019, it started with headaches, a lack of coordination, and difficulty with fine motor movements. He ultimately was diagnosed with Grade 4 Gioblastoma Multiforme and began his fight with the help of the team at Henry Ford Hermelin Brain Tumor Center. Within a week of his diagnosis, my dad underwent an eight hour craniotomy, where at many times, he was awake and talking. He then qualified to participate in a clinical trial to not only help with his fight, but to also help find a better treatment for glioblastoma multiforme for others. Within 4 days, he was walking, talking, and discharged. He was deemed “the miracle man” by the Neuro ICU staff. However, this was just the beginning of his fight. Throughout the last 15 months, he has shown bravery, resilience, and courage in the face of unbelievably challenging obstacles. His life is very different than he imagined a year and a half ago. However, his faith has never wavered. He is solid in his faith and knows that with whatever challenges and uncertainties that lie ahead, God is with him and our entire family. He has never lost his optimism and up-beat attitude, and he uses his time to do things he enjoys and spend time with those he loves. He continues on this journey with a second surgery in the near future, along with the possibility of participating in another clinical trial. He knows that the clinical trials bring no certainty of a cure, but with every step, we are getting closer.