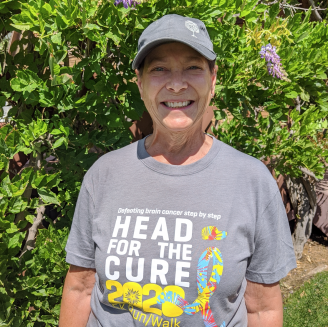 Susan was diagnosed with a grade 3-4 oligodendroma/astrocytoma brain tumor in 1998.  After the initial shock of the "not so good news", she took on a positive attitude and endured surgery, radiation and chemo with a level of courage I didn't realize she possessed.  One of the first signs of her positive attitude occurred the morning after she was moved from the ICU after surgery.  A doctor stepped into the room, introduced herself as Susan's oncologist and told her she should plan on about 6 months to live.  Susan immediately told the doctor to leave and that she didn't want to see her again.  She refused to allow someone to tell her she only had limited time.  I truly believe that she beat brain cancer due not only to the excellent medical care she received and support from friends and family, but largely because of her unwavering will to live and her positive attitude.  Although treatments caused side effects including fatigue, nausea, numbness in her extremities, hair loss (some permanent) and loss of appetite she approached each day with courage.  She never once complained when it came time to go to radiation or chemo treatments and never fell into a state of self-pity, even when she had to ask me to pull over on the way home from a chemo treatment so she could throw up.

Although I thought it may be too early, 3 weeks after surgery Susan insisted she was well enough to return to work as a library administrator.  At the time she was in charge of building a new library and resumed her responsibilities.  Needless to say, a lot of people were surprised, including myself.  She refused to allow cancer to deny her the ability to continue with her life and it was great to see her speak at the library grand opening.

Susan's story of survival has made us realize that we should never lose hope in the fight against brain cancer.  She is living proof that this disease can be beat and through research, support and a lot of positive energy we will win this battle.