The 5th annual Head for the Cure 5K - Des Moines on May 19th is about more than just a 5K run/walk.  It's about the people who have fought or are fighting this disease every day.  Sharing your story is a way to bring the brain tumor community together with these inspirational stories of strength. Find out more at www.headforthecure.org/des-moines 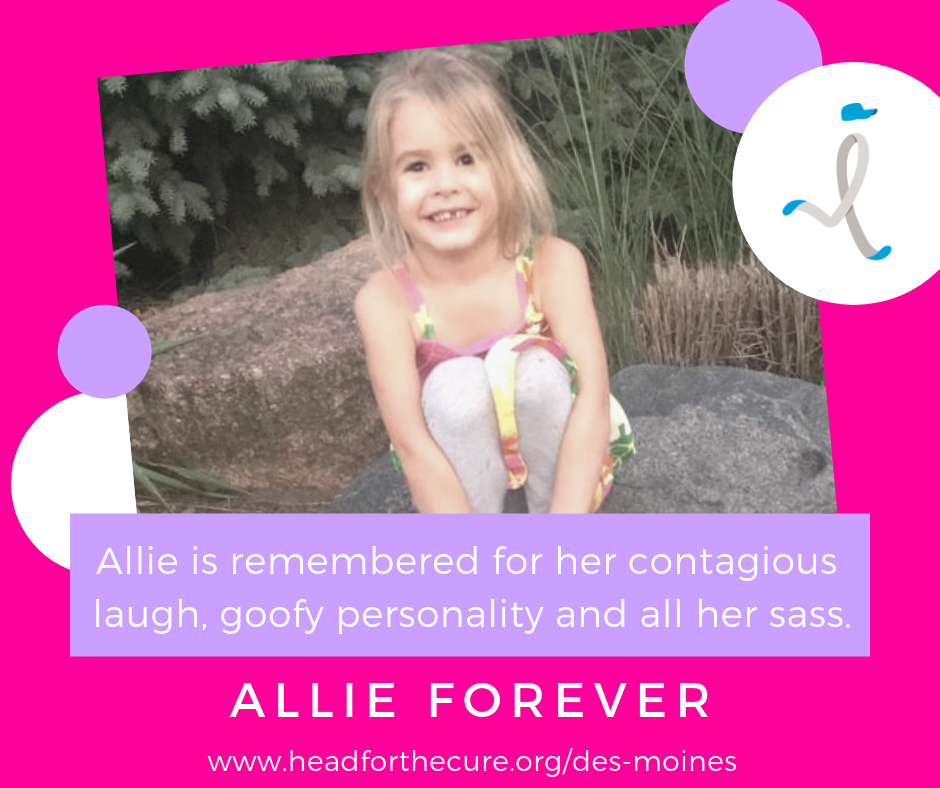 Allie had DIPG. Diffuse Intrinsic Pontine Glioma is brain tumor found in an area on the brain stem called the pons. It’s an inoperable tumor. DIPG primarily affects children and it makes up 10-15% of all brain tumors in children. There are only 150-300 new diagnoses per year in the U.S. DIPG, unfortunately,  has had little to no progress in treatments or cures and fewer than 10% of children with DIPG survive two years from diagnosis.  The median survival rate is about 9 months after diagnosis.

Allie was diagnosed 23 February 2018.  Her dad and mom and other family members noticed Allie’s balance was off and her eyes seemed to cross a little. We all thought she needed glasses. After going to a routine doctor’s appointment Allie went through a CT scan where doctors found a mass on her brainstem. Later that day she was taken to the ER per her doctor to do an MRI. Before the MRI was over the neurologist came out and broke the news to Allie’s parents. Allie then had surgery to remove fluid from her brain and had a biopsy. After a week in the hospital she was able to go home and immediately underwent 6 weeks of radiation. During that time she was sedated 5 days a week. During that time Allie’s biopsy results showed her cancer was Stage 4 and without the radiation she would only have roughly 3-4 weeks. The radiation gave Allie a chance to go on a Make a Wish trip with her mom, dad and brother and sister. She was also able to have an amazing summer with all of her family around her. Allie passed away August 2nd 2018 after a strong fight, at the age of 5 years old.

Allie LOVED Minnie Mouse, Peppa Pig, playing with her babies playing hide n seek, throwing water balloons at her siblings and watching all her cartoons! Allie’s favorite color was purple but she was pretty popular for wearing Minnie Mouse pink as well. She really enjoyed going to Village Inn or as she called it “Pie City.” Allie spent her last month’s doing all of her favorite things with her family. Allie is remembered for her contagious laugh, goofy personality and all her sass.

Allie’s father, Korey, and step-mother, Meghan, started running the Head for the Cure event last year to spread awareness about DIPG and to share Allie’s story. This year they started the Allie Forever team to promote awareness for DIPG and all forms of pediatric cancer. Allie Forever keeps her spirit alive!  Participating in this event means that we can spread awareness, share her story, and educate others on DIPG. Considering that DIPG is the only pediatric cancer that hasn’t made any advancements means we need to speak up and support more research.

If anyone is considering doing this event we HIGHLY recommend it! It’s emotional for survivors to see the support, its inspiring for those fighting and it’s a remembrance for those that lost their fight.