Each year, dozens of teams participate in our annual Head for the Cure 5K - Chicago.  Team Elissa has participated in honor of Elissa with their "Mom's Walk"  after her courageous battle with brain cancer. By participating in this event, you are helping fund research and programs to support the brain tumor community.  Learn more about Team Elissa! 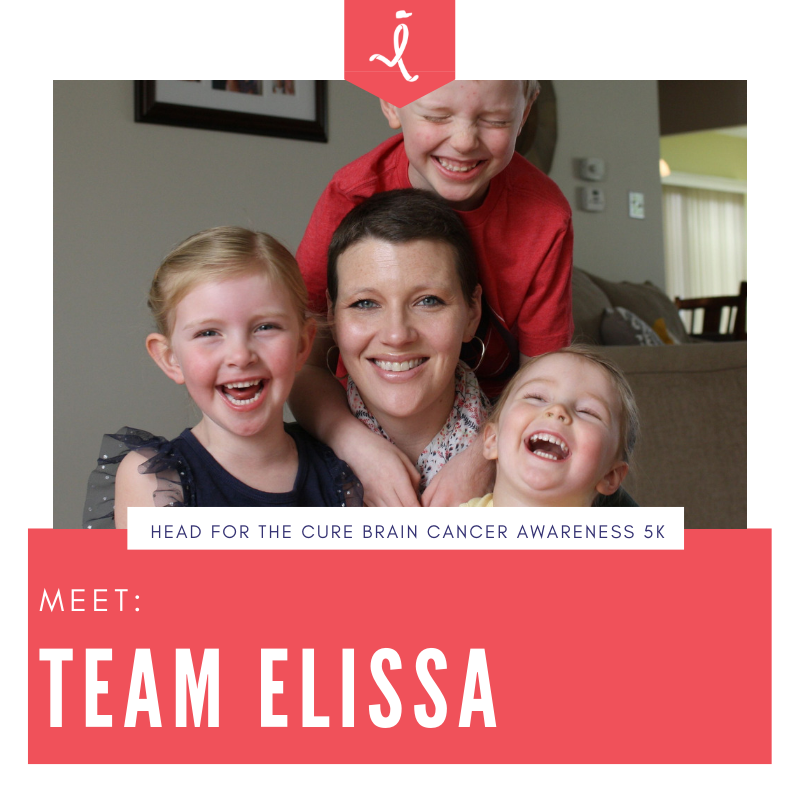 Labor Day 2015 will always be remembered in my family.  Elissa ended up in the local ER with a persistent headache that just kept escalating.  Within a few hours we were told of a large mass, followed by an ambulance ride to a major hospital.  Two days later she had brain surgery and about a week later we were given the diagnosis and prognosis.  Glioblastoma, about a 50% chance to live 18 months and no matter what we do it will keep coming back. I immediately started crying, but Elissa just listened intently to what the Dr. was explaining and what the next steps were.

She proceeded with the standard of care treatment and the next nine months were actually ‘normal’.  Besides the Dr. visits etc, she lived just as she had before the surgery. No restrictions. Elissa’s outlook was ‘I am going to make the most out of whatever time I have’.  To her that was keeping everything normal for her kids. When she visited our kids’ schools she always wore a wig, just because she didn’t want the other kids talking about her and upsetting our kids.

When the tumor decided to show itself again in May 2016 she elected for another surgery, which she also recovered from.  One month later it returned and I started to push for going to other hospitals in the country or trying other options available.  She just wasn’t having it as it would have been too intrusive to her family and that wasn’t worth it to her.

Elissa lived her life, rather stubbornly, with GBM until January 3, 2017.

Elissa dealt with her situation in a manner I still can’t understand or fathom.  My small examples above don’t do it justice. She was giving one of the worst prognosis one can hear and basically said, ‘ok…what do you need me to do and I will do it.   In the meantime I’m going to live my life and keep our home normal for my kids as long as possible’. That is not cliché, that is exactly what happened.

This year will be family’s 5th year walking with HFTC Chicago.  We walk to support the cause, to make others aware and for my kids…”It’s mom’s walk”.  Personally I still support HFTC because I know the vast majority of money raised actually goes to hospitals researching and looking for a way to extend the life expectancy of people with brain cancer.