Each year, many teams participate in our annual Head for the Cure 5K - Houston. Team Tom participated last year for the first time and Tom received one of the Keeping the Faith nominations! This October, they are participating in honor of him after he passed away from a Glioblastoma earlier this year. By participating in this event, you are helping fund research and programs to support the brain tumor community. Learn more about Team Tom! 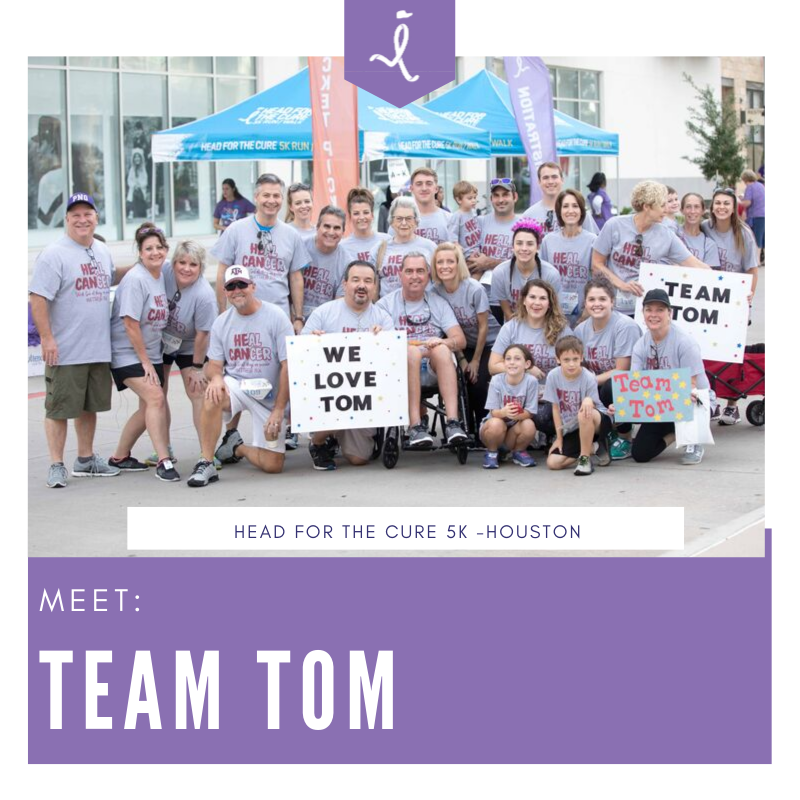 "It was an ordinary day in June of 2017 as Tom and I left for work. An hour after we said our morning goodbyes and I settled in for my workday, I received a text from Tom that he couldn’t talk and that a family member was bringing him to the hospital. After multiple tests, it was confirmed he was suffering from aphasia, the inability to talk. Days later, a spot was noticed on his brain. A month later, Tom was diagnosed with a Glioblastoma. It was a heartbreaking day with lots of tears and fear of the unknown of what may lie ahead.

Tom had surgery to remove the tumor in July 2017. Months later, we were engaged and set an April 2018 wedding date. In February 2018, the tumor returned and surgery was performed two weeks before our wedding day. The incredible doctors at MD Anderson promised me that Tom would meet me at the altar on April 14. Two days before our wedding, a team of doctors called one by one asking if we needed anything and continued their promise that he would be at the church for our nuptials. On April 14th, the church doors opened and Tom was standing at the altar awaiting my walk down the aisle. Tom never lost hope and always remained positive. Tom was truly an inspiration to many and we hope that his story of pushing forward through a horrible diagnosis can encourage others to never lose hope and continue to live life to the fullest. We have remained strong through the struggles as Mr. and Mrs. Tom Broussard!

On March 18th 2019, Tom lost his battle to this horrible disease. Tom fought hard until his last breath and held his rosary in his hand when he left this earth to meet the Lord. He believed that every day was the “best day ever” no matter what obstacles stood before him. He was a gentle, kind, loving, generous man and his legacy will live on. We will make sure of it." - Vanessa Broussard, wife of Tom