Each year, hundreds of teams participate in our annual Head for the Cure 5K - Metro KC.  Team Tara has participated in honor of Tara Bellar who is a 21 year brain cancer survivor and a 3 year breast cancer survivor.  By participating in this event, you are helping fund research and programs to support the brain tumor community.  Learn more about Tara's Story! 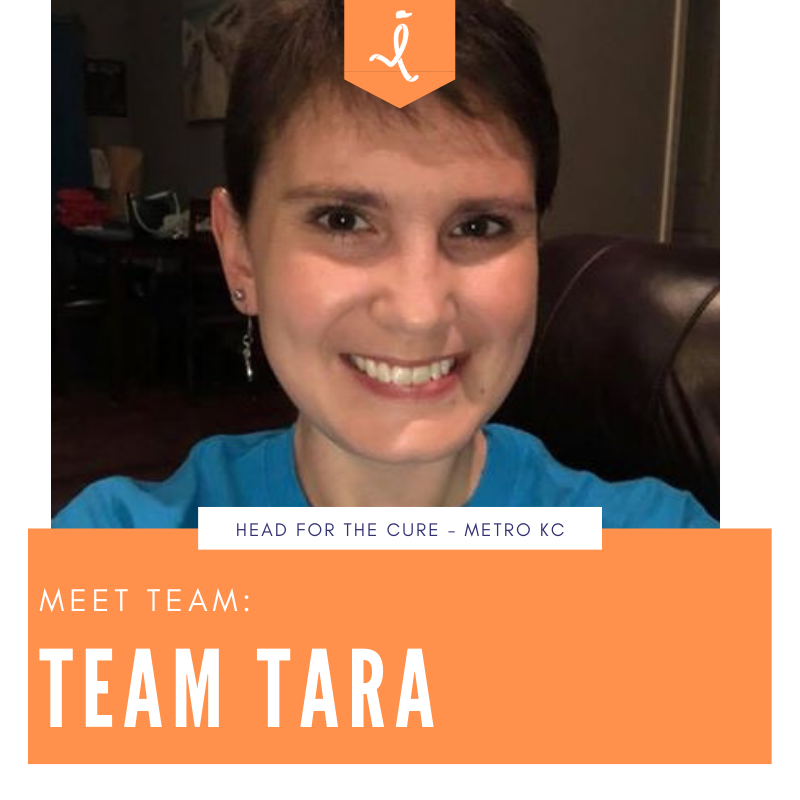 It all started in the summer between 6th and 7th grade in 1998. I was 12, my aunt and uncle took me and my sister to Disney World in June.  I started to get headaches and was really tired.  They thought it was just because of the humidity and going no stop in Disney.

When we got back from our trip the headaches and tiredness continued.  I then started getting sick every morning.  My parents took me to the family doctor.  He put me on some medicine to help with the throwing up and thought it was something with my stomach.  It seemed to help and I thought I was fine.  Then a couple weeks later, the headaches and getting sick were nonstop.  We went back to the doctor and he ran a few tests for Mono and a few other things.  They were all negative. This went on until the end of July or so.

I then had a barium swallow and they told me have a Cat-Scan a week later once the Barium had time to get out of my system.  So we went for the Cat-Scan and they could not perform it because the Barium was still inside me due to me not keeping anything down and throwing it up. So we were sent home.

When we returned home from the Cat-Scan, we had a message from the doctor saying to go to Children’s Hospital and there would be a doctor waiting for me.  When we got down there, I couldn’t walk or stand up.  By this time, my balance had been affected by the tumor since it was on my Cerebellum.

There was a doctor there and she looked at my eyes for a couple minutes and said that there was something really wrong with me and rushed me in to have an MRI.  Within 45 minutes of having the MRI, they knew I had a Bain tumor.   This was on a Friday evening at about 11 at night and the surgeon wanted to get me hydrated and wanted to wait until he had a full staff on Monday.  So I spent the weekend in the hospital getting hydrated before surgery.

I had a 4 hour surgery to remove the tumor and they got it all. It was the size or a Tennis Ball when it was removed.  They told my parents that if they would not have caught it when they did, within 2 weeks I would have died from it being a fast growing tumor. It was Medullablastoma, which is more common in boys ages 4-9.

I spent 1 week in the hospital after surgery.  About 1-2 weeks later, I started Radiation.  5 days a week for 6 weeks.  About half way into Radiation, I started Chemotherapy which lasted for 1 ½ years.

Fast forward to 2015, 17 years later.  In September of 2015 I was diagnosed with Invasive Ductal Carcinoma-Triple Negative Breast Cancer.  I ended up going through 5 months of Chemotherapy, a Lumpectomy surgery and 35 rounds of Radiation.