Each year, teams participate in our annual Head for the Cure 5K - St. Louis.  Team HICCUPS has an amazing mascot that has been the best friend of Dorothy Frese as she has journeyed through her brain tumor diagnosis with positivity and amazing spirit. By participating in this event, you are helping fund research and programs to support the brain tumor community.  Learn more about Team HICCUPS! 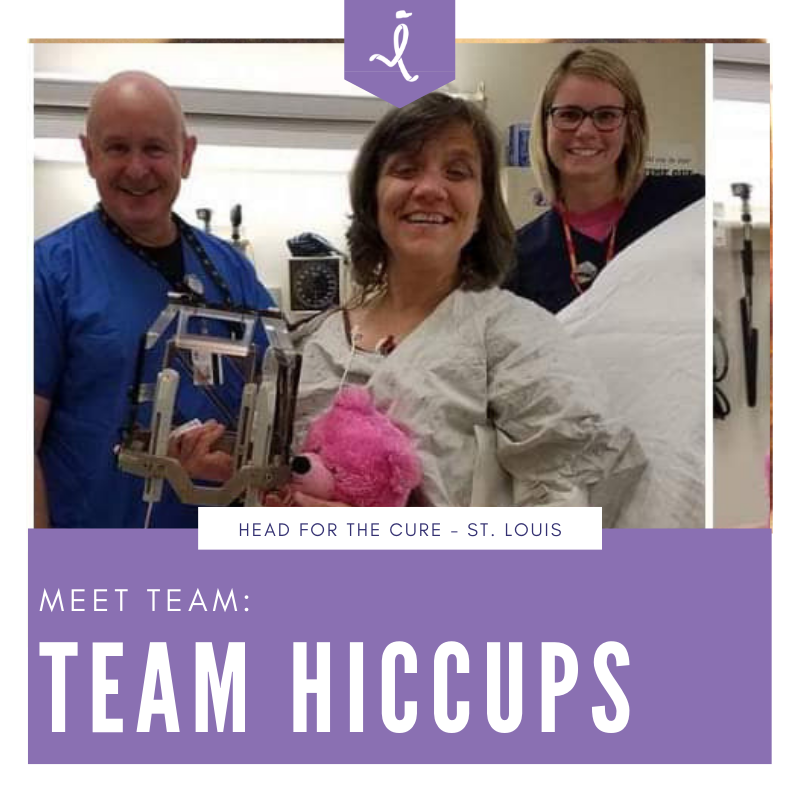 In December 2017, Dorothy Frese had a seizure at home, and her sister woke her up to take to the hospital. The hospital immediately ran some tests and saw something on the left temporal lobe of the brain.  Being a 4 year breast cancer survivor, they first thought it has metastasized into my brain.  I was referred to Barnes-Jewish Hospital because of the location to meet with Dr. Leuthardt. He did an MRI and PET scan and followed with a biopsy.  On February 7th, Dorothy was officially diagnosed with a brain tumor but was a perfect candidate to receive gamma knife treatment.  She began treatment in March and after 3 months, everything looked like it was improving.  In November 2018, she was not feeling well and had speech challenges.  After going back to the ER, I was suffering from radiation inflammation. After being put on steroids, the swelling went down, and she is currently not feeling any pain from treatment.

Throughout the entire journey, Dorothy simply said that this diagnosis was “just a hiccup in her life”.  Because of that, she received her companion, a teddy bear she lovingly named HICCUPS, that traveled with her to appointments, treatments, scans and hospital stays.  She never lost her spirit and credits her amazing sisters and friends who have given her rides, checked in with her and helped her maintain her spirit and positivity through treatment. Even her neuro-oncologist commented that he’s never seen anyone with more positivity that is going through the same journey.  Dorothy credits Dr. Leuthardt’s care because he is more than just a doctor to her. He’s family.

After participating in her first Head for the Cure 5K – St. Louis in 2018, she is looking forward to celebrating her milestones along with her friends, family, and of course, HICCUPS!