For the past 7 years, more than 60 teams continue to participate in our annual Head for the Cure 5K - St. Louis.  Team Tumoradors supports Jeni Birr in her journey with a GBM and celebrates her 6 year survivorship. They also honor Jeni's dad who lost his battle with the same type of brain cancer. Jeni continues to defeat the odds with her determination and spirit! By participating in this event, you are helping fund research and programs to support the brain tumor community.  Learn more about Team Tumoradors! 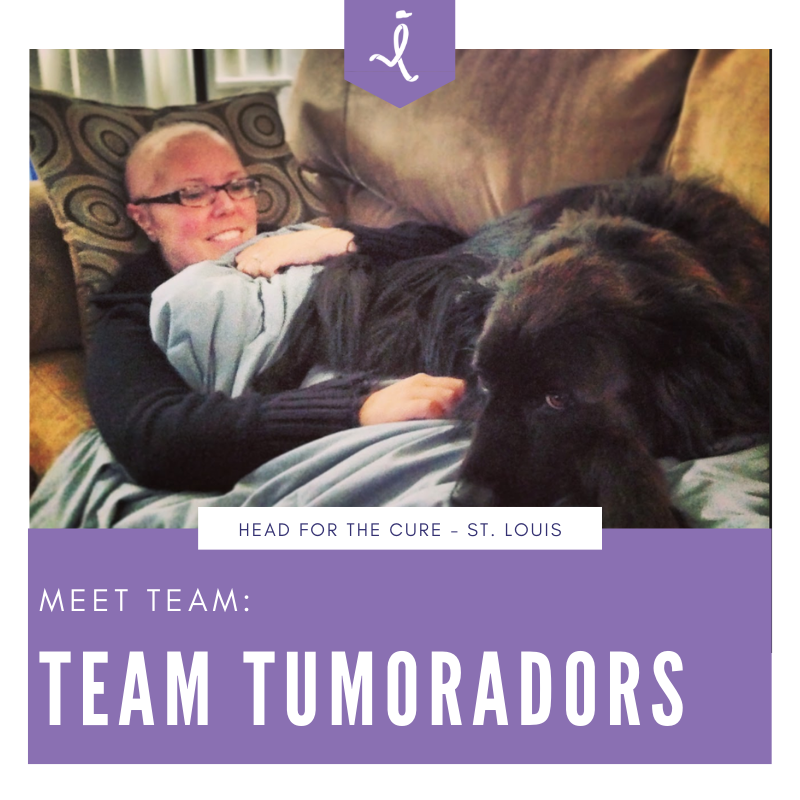 In 2010, my dad was diagnosed with an inoperable GBM4 and given a month to live, exactly one month before his 63rd birthday.  He chose not to fight it, and ended up going almost 6 months before crossing over.  Watching the smartest man I had ever known descend into a confused, angry zombie, was the hardest thing I have ever been through.  Even harder than anything I've endured since learning only two years later, one month before my 30th birthday, that I had the exact same tumor.  Every doctor I've mentioned this to insists this is purely coincidence, lightning striking twice.

I had almost no symptoms leading up to my onset seizure, which happened in the office of the Panera cafe I was managing at the time.  Fortunately, my tumor was in a far more operable location, so after seeing an oncologist that wanted to start chemo and radiation right away without doing surgery, my husband insisted on a second opinion, and we were referred to an incredible surgeon to perform my bi-frontal craniotomy, who let me know that based on the size of my tumor, if I did not have surgery, I would likely be dead within a month.

I was told that on top of the small chance with any surgery that I might not wake up from the anesthetic, there was a 5% chance I would lose the use of my legs, and there was a 100% chance that I would wake up unable to speak for approximately a month or so.  This happens with every resection surgery in the area where my tumor was located, so my husband and I had all sorts of systems set up from hand signals to flash cards, because we really didn't even know if I would be able to read the flash cards, but fortunately, after about 8 hours in surgery, I woke up able to speak!  The surgeon's assistant asked me "what is 3 times 9" and I said "27."  When the surgeon messaged her to see how I was doing and she told him I was doing math, he thought she was joking.  Aside from the worst headache I've ever had in my life, and looking like I went a full seven rounds with Joe Louis, the surgery was a huge success with 95% of the tumor removed, and no loss of functions.

About a month later I began concurrent chemo and radiation every day for 6 weeks, and continued cyclical chemo 5 days out of every 28 for the next 14 months.  I went in for frequent MRI's during this time, and they were always very promising.  The first I had, about a month after radiation was completed showed no tumor whatsoever.

When I was done with the year plus of chemo, my oncologist decided to try to wean me off of the anti-seizure medication I was taking, but I ended up having a seizure again, so I am still on that, and likely will be for the rest of my life as some people can come off, and some people can not, and I am apparently in the latter category. I was given the okay to go back to work just over 2 years after diagnosis, in June of '16.

I just passed my 6 year anniversary from diagnosis, and still go in every 6-8 months for check-up MRI's to catch it early when it does come back, but with the love and support of my husband, family, and friends; I am confident I will continue to fight and win.

I love participating in events like Head for the Cure as it makes me feel like I am directly contributing to finding a cure to this horrible disease that took my father from me far too soon, and is trying to take me as well.  As long as there is breath in my lungs, I will continue to stamp out brain cancer one step at a time.