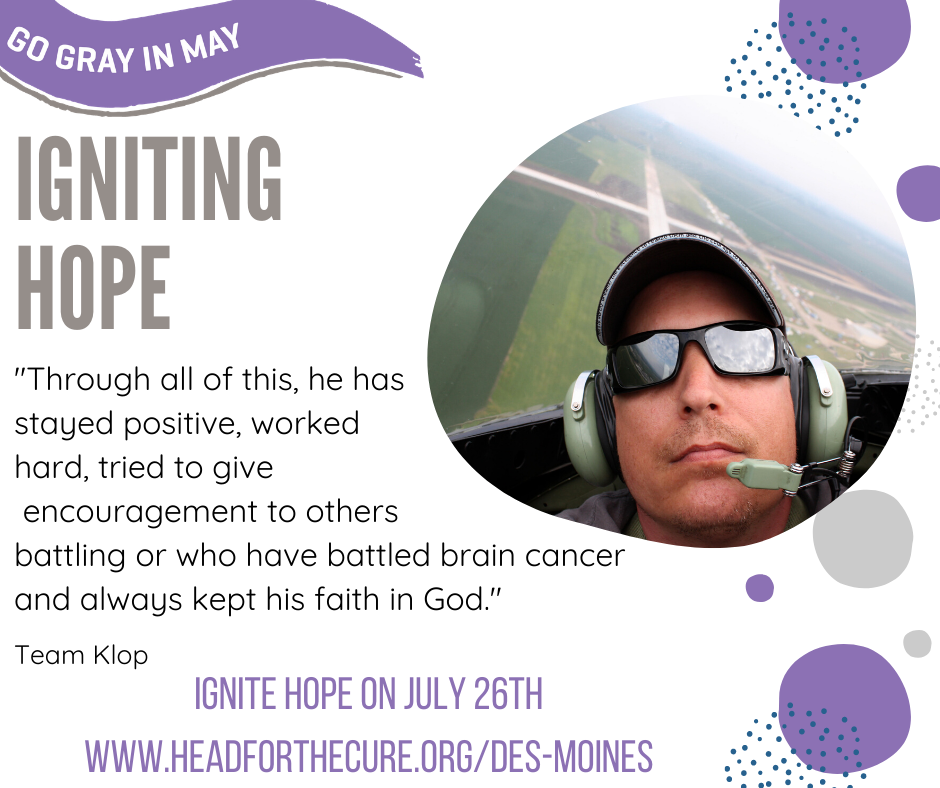 Each year Head for the Cure invites you to Go Gray in May for Brain Cancer Awareness Month, and this week we are sharing inspiring stories about those igniting hope within the brain tumor community! At this year's 7th Annual Head for the Cure 5K - Des Moines we will ignite hope and show support for all who have been impacted by a brain tumor diagnosis!

This terrible disease affects real people every day! Kris, from Team Klop, participates and share's his story of being a survivor. They are working to bring together not only families and friends, but the entire Wichita brain tumor community to help ignite hope for brain cancer patients, their families, friends, caregivers, and other supporters!

Meet Team Klop & Learn How They Are Igniting Hope!

Kris had no symptoms of having a brain tumor prior to his seizure on 9/16/08. When he went to the hospital they found that he had a mass on his right frontal lobe. A few days later he had surgery to remove it and the results came back that he had a stage II brain tumor. About a month later we met with doctors at Mayo Clinic and they said that about 1/3 of the tumor was missed during surgery and another surgery was scheduled for a week later. After the second surgery, the doctors called to say that there was an infection in the brain from the first surgery and Kris would need to do a few weeks of medication through a pic line that he had to have inserted. We were also told that Kris' tumor was not grade II but rather a grade III Anaplastic Astrocytoma. This was followed by chemo and radiation and in February 2009 Kris had no further signs of cancer. Through all of this, he has stayed positive, worked hard, tried to give encouragement to others battling or who have battled brain cancer and always kept his faith in God. He has now been cancer-free for over 10 years!

YOU CAN HELP IGNITE HOPE!

Every Head for the Cure event marks a day of celebration where we honor and inspire hope for those diagnosed with a brain tumor, we remember those who have lost their battles and we are inspired to carry on the fight! During these difficult and challenging times, we could all use some stories of hope and positivity. The brain tumor community is lucky to have such amazing supporters who brighten the lives of those affected by this disease each and every day.

Show your support and ignite hope by registering for or donating to the 7th Annual Head for the Cure 5K - Des Moines taking place on Sunday, July 26th! Even though we aren't physically together now, we can still show those battling a brain tumor that NO ONE FIGHTS ALONE!

REGISTER OR DONATE IN HONOR OF GO GRAY IN MAY!