Each year Head for the Cure shows support for those who have been affected by a brain tumor during our annual 5K event in Central Texas. This year, to protect the health and safety of the community that we serve during the COVID-19 pandemic, we will be VIRTUALLY celebrating the 8th Annual Head for the Cure 5K! Just because we are not together doesn't mean that we're alone!

Find Out About the Virtual 5K

Although we are having to make some adjustments, one thing is for certain...we won't stop fighting until there is a cure for brain cancer! This terrible disease affects real people every day, and Head for the Cure can't build awareness, raise funds and ignite hope for the community without YOUR SUPPORT! We fight each day because of the individuals like Doug Holcomb from the team, Joggin' for the Noggin'. 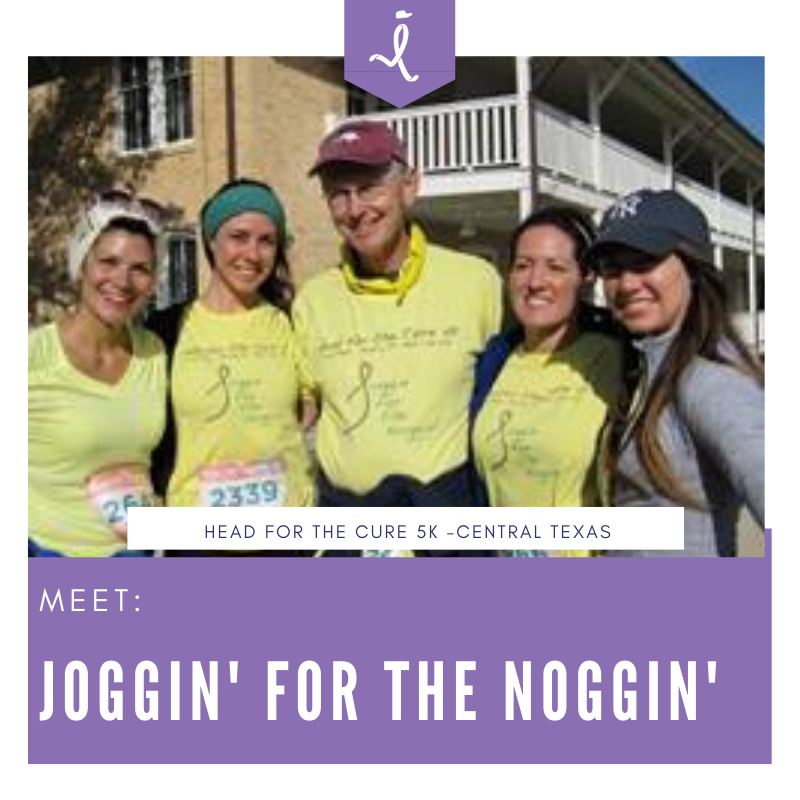 About Joggin' for the Noggin'

In 2014, Doug was the first team captain of the Joggin' for the Noggin 5K team while he was valiantly fighting for his life. He picked the team name, donned the team T-shirt, and walked the 3-mile course, joined by his friends and family. In his ever-optimistic approach to life, he had hope that he would be one of the very few who survived brain cancer. Unfortunately, he was not and he lost his battle seven months later in December 2014. Team Joggin' for the Noggin' continues to support Head for the Cure to keep the hope for a cure alive and says that, "Doug would want us to do this!".

How Joggin' for the Noggin' is Fighting Back Virtually:

Immediately following the announcement that this year's Central Texas 5K event would be taking place virtually, team Joggin' for the Noggin' reached out to their past team members and supporters and encouraged them to show their support in any way they could by donating in memory of Doug Holcomb. Within 24 hours of being sent, this message inspired over $1,000 in donations to the Central Texas event.

you can make your own impact!

Head for the Cure works to inspire hope for the community of brain cancer patients, their families, friends, caregivers and other supporters, while celebrating their courage, spirit and energy. Every Head for the Cure event marks a day of celebration where those diagnosed with brain cancer are honored and celebrated by their friends and families, those who have lost their battles are remembered, and we are all inspired to carry on the fight.We know that during these difficult and challenging times it can be hard to find stories of positivity. We are lucky to have such an amazing community of supporters who brighten the lives of those affected by brain tumors each and every day.

If you are interested in sharing your story please email kelsi@headforthecure.org.